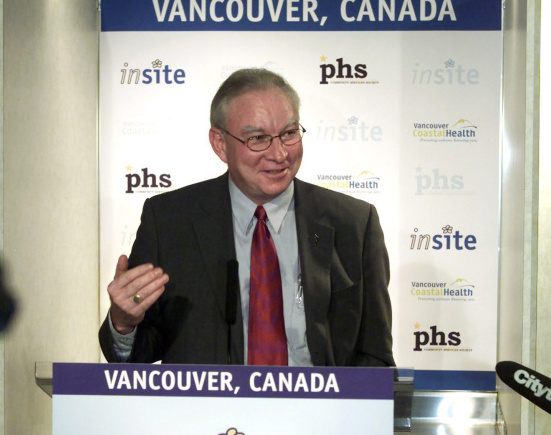 It happened last fall on the West Coast. The sun was shining brightly on Galiano Island, which lies between Vancouver Island and the metropolis of the same name. And Larry Campbell, one of the 1,000 islanders on this “jewel of the Georgia Strait,” was feeling good.

In fact, he hadn’t felt this good since… since…” Oh. For a long, long time,” says the 74-year-old former Vancouver mayor, former police officer and Senator in the Ottawa Parliament since 2005.

Behind this busy career, Larry Campbell has been suffering from chronic depression for 30 years now. “And I’ve always been a bit irritable. It didn’t get any better with age…”

But in the fall of 2021, oddly enough, he was feeling good. He was no longer out of his depth at the slightest hassle. His choleric temperament seemed to be calmed.

Intrigued by this new-found serenity, he spoke to his wife. She was not really surprised.

Wait, wait,” begs the caller. This is not a story about a wife drugging her husband on the sly,” he insists. “Before you blame my wife, you should know that she told me what she would do. But then, like many husbands, I tended not to always listen to what my wife said…”

He laughs heartily at the end of the phone. But the essence of his message is not about how microdoses of psilocybin – the hallucinogenic element in so-called “magic mushrooms” – got into his coffee.

What Larry Campbell wants to emphasize is the therapeutic potential of the drug, and that it needs to be studied closely by expanding access for therapeutic use. “The science on this is still incomplete, but there is evidence that psychedelic drugs can help treat depression, anxiety, post-traumatic shock and addiction.”

His example speaks for itself, he points out, since in his case the placebo effect can be ruled out. And by ingesting microdoses of psilocybin, he never felt any hallucinogenic effect.

“After three or four days of taking it, I started to feel happy. That’s the only way I can describe it. I wasn’t seeing unicorns, the sky wasn’t bluer, I wasn’t overcome with a sudden urge to listen to Janis Joplin or Jimi Hendrix… I just felt happier.”

I realized that my mindset had changed.

“I used to be able to get stupidly angry just by standing in line. But now, just when I could have gotten mad, I could reason with myself. That was a big change. Now, I still get angry sometimes, but it doesn’t happen as often anymore!”

From the RCMP to the Senate
Larry Campbell knows a thing or two about drugs. A police officer with the Royal Canadian Mounted Police (RCMP) drug squad, he founded Vancouver’s first coroner’s office in 1981 before being appointed Chief Coroner for British Columbia. It was a harrowing few years of investigation, he says, as the opioid crisis began to take its toll on the West. Post-traumatic shock syndrome still plagues him. “You don’t investigate thousands of deaths without paying a price…”

In 2002, he was elected mayor of Vancouver by proposing a new strategy to fight drug addiction and overconsumption. The following year, he piloted the opening of the city’s first supervised injection site (sorry: the first in North America!), and was appointed Senator in Ottawa in 2005.

Would the drug squad officer ever have imagined self-medicating with magic mushrooms? “No, no, no,” laughs Larry Campbell. “I was a police officer, I was enforcing the law and I thought it was the right thing to do. But one day I became a coroner, and my job was to keep people alive by preventing death.” And in Vancouver, he recalls, hundreds of people are dying “from a disease called addiction.”

While he was well aware of the opioid problem, he knew little about psychedelic drugs. They are not very addictive and in some cases can even relieve suffering. Work at Johns Hopkins University in the United States, among others, has shown encouraging results with microdosing of psilocybin for the treatment of depression and addiction.

I am not suggesting that psychedelic drugs should be made available for recreational use. What I would like to see is exemptions for therapeutic use without having to go to a doctor.

In Canada, with rare exceptions, the production, sale and possession of magic mushrooms are still illegal.

The senator, by the way, does not have an official exemption to use his psilocybin. He says he has read a lot about the subject (including the works of American mycologist Paul Stamets). He uses a small scale to measure his own milligrams of mushrooms, which he consumes as needed. But he refrains from advising anyone tempted by this experiment. I take responsibility for what I do for myself,” he says. If you’re suffering from severe depression, it’s not a bad idea to discuss it with your doctor. Maybe he or she can refer you to another specialist who knows about psilocybin, even if there aren’t many.”

And how does he get his supply? “I can’t speak for the rest of Canada, but here in British Columbia, it’s not very difficult to find someone who can advise you and sell you some…”

Which is not ideal, agrees Larry Campbell. And that’s why he takes every opportunity to educate elected officials on the issue.

“There are people in the Senate and the House of Commons who are going to think I’m old and crazy… But we have to talk about it.”

In recent years, numerous studies have shown promising results for the use of psilocybin in a clinical setting. Unlike microdrug users, such as Larry Campbell, who self-medicate without medical supervision, psilocybin use in the clinical setting is combined with psychotherapy – in other words, the patient takes the substance in the presence of therapists who will monitor its effects for a few hours. Researchers at Johns Hopkins University in Maryland have published several studies on this topic, including anxiety relief in cancer patients, those with severe depression and those with addictions. In some cases, a single dose of psilocybin has been shown to have beneficial effects that lasted for a year.

Getting psilocybin with Health Canada

Last January, Health Canada announced a new program to allow doctors to apply to prescribe certain psychedelic restricted drugs, including psilocybin and LSD, for people with serious or life-threatening conditions. According to the program, these substances must be taken in a clinical setting, combined with psychotherapy by trained specialists. According to Health Canada, as of June 23, 18 applications to treat 22 patients with psilocybin have been granted. “The remaining requests are under review or have been withdrawn by the requesting physician,” Health Canada told us.

Despite this announcement presented as a relaxation, the new program has proven to be more restrictive than the previous exemption process: between August 2020 and December 2021, 79 Canadians were granted an exemption by Health Canada to use psilocybin. Since January, some applicants have been denied because they did not meet the new rules. This is the case of Janis Hughes, a 65-year-old woman from Winnipeg whose story, reported by the CBC in February, particularly outraged Senator Larry Campbell. Ms. Hughes, who suffers from terminal breast cancer, wanted access to psilocybin to ease the anxiety that was plaguing her final months. Her request to Health Canada for access for therapeutic use was denied. I understand what she’s going through,” says Campbell. Two years ago, I spent 40 days in hospital treating cancer. The irony, as this lady pointed out, is that she could get medical aid in dying in 10 days, but she can’t get psilocybin.”

Paradoxically, buying magic mushrooms on the market seems to be getting easier and easier – just type a few keywords into a search engine to find well-researched mushroom supplier sites that promise discreet delivery. In recent months in Vancouver, many businesses have even begun selling magic mushrooms openly without much trouble from the police. “Hundreds of businesses across the country were selling cannabis before it was legalized,” Dana Larsen, owner of Magic Mushroom Dispensary, told CTV in May. “I think we’ll see a similar phenomenon with mushrooms.”

Last May, the first Quebec clinic, Mindspace, received approval from Health Canada to treat a patient suffering from depression with psilocybin. Laval University researcher and pharmacist Michel Dorval wants to document the social acceptability of taking psilocybin for people at the end of life. “It’s not something that’s well known. We want to know what people think about it, if they would be interested in this possibility,” says Dorval. The problem of access to a trained physician for this treatment remains a major obstacle. “We have patients who are willing to consider this option, but can’t find a doctor to go with them.”