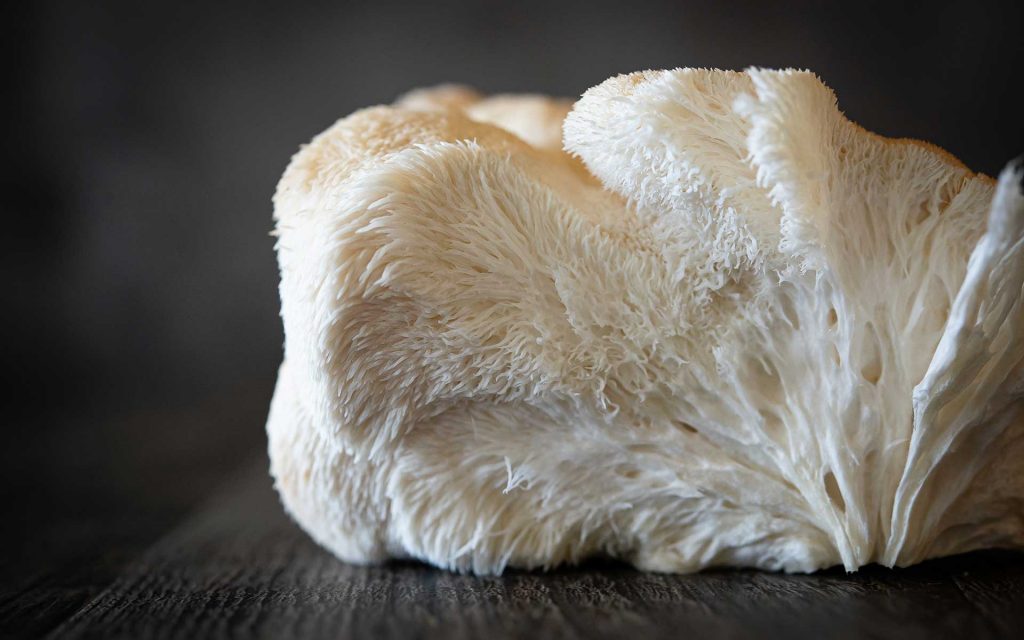 This week we will be discussing the mushroom Lions Mane, or Hericium Erinaceus, and its health applications for Alzheimer’s Disease (AD). Currently, there are no drugs on the market that prevent, reverse, or halt AD progression. Although a few clinical trials in the pipeline show promise, scientists are also looking to alternative treatments, like Lions Mane, to combat AD.

Lions Mane is a culinary mushroom and is commonly eaten in countries such as Japan and China without any harmful effects. It’s generally found growing under old broadleaf trees and contains erinacines, natural substances with potential pharmacological effects on the central nervous system (CNS). There are two forms of Lions Mane that can be ingested; the fruiting body and the mycelium that encompasses the erinacines. Erinacines fall within a group of compounds called cyathin diterpenoids, and are stimulators of nerve growth factors (NGF). Nerve growth factors play a supportive role in the CNS, and are critical to adequately protect surviving and developing neurons.

Rats given erinacine A for 3 weeks increased their concentrations of noradrenaline and homovanillic acid in the hippocampus compared to controls and showed evidence of an overall increase in NGF levels, most notably in the dentate gyrus of the hippocampus. Increases in noradrenaline and homovanillic acid result in more alertness and better retrieval of memory along with breaking down fat and increasing blood sugar levels to promote more energy, suggesting that erinaceus A promotes nerve and brain health in animal models. Furthermore, H. erinaceus mycelium containing erinacine A administered orally to AD transgenic mice for 30 days resulted in decreased recruitment and activation of plaque burden compared to controls. Other structures often impaired in AD, like the hippocampus and the locus coerulous, also showed functional improvement compared to those not given the mycelium.

Several different compounds in H. erinaceus appear to contain protective benefits, such as amyloid plaque reduction, insulin-degrading enzyme expression, enhancing NGF release, and even managing neuropathic pain. Although some is known about erinacines, many of the compounds are still undergoing research, with some still being discovered. These discoveries and continued ones will hopefully continue to pave the way for therapeutic strategies to prevent, manage, and slow AD progression. Furthermore, prior research and clinical trials have proven that Lion’s Mane and its extracts are safe for human consumption at doses of 3-4 grams per day (although allergies have been noted). If this research interests you, we encourage you to discuss Lion’s Mane with your primary care physician to potentially improve your cognition.

0 Comments for “Lion’s Mane: A Mushroom to Remember”