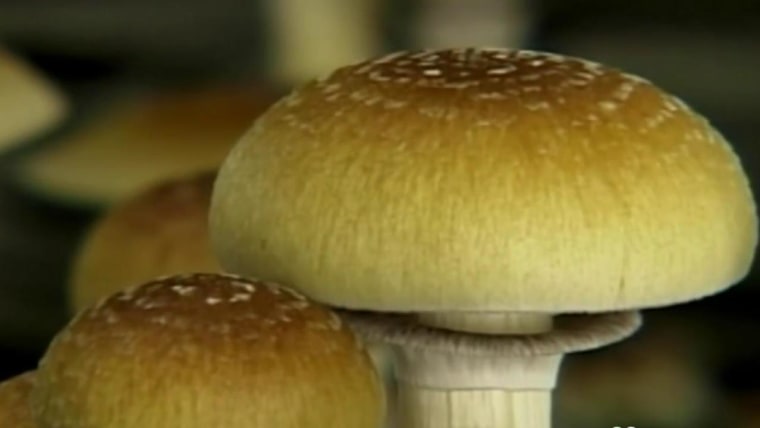 A couple of doses of a psychedelic drug may treat depression as well as one of the most commonly prescribed antidepressants, a small and short study published Wednesday shows.

A Phase 2 clinical trial, conducted by researchers in London, was the first randomized trial to compare therapeutic doses of psilocybin — the psychedelic compound found in so-called magic mushrooms — with a daily medication. The results were released in The New England Journal of Medicine.

“This is huge because it’s showing that psilocybin is at least as good — and probably better — than the gold standard treatment for depression,” said Roland Griffiths, director of the Center for Psychedelic and Consciousness Research at Johns Hopkins University, who was not involved in the study.

Research on how psychedelics can be used to treat mental health conditions is still in its early stages, and much more will be needed to determine whether psychedelics, including psilocybin, are an effective long-term treatment. It’s also still unclear how treatment involving psychedelics would be used in the real world, as patients must be monitored for hours when they are given the drug.

The small six-week trial included 59 adults, nearly 40 percent of whom had been taking medication to treat their depression before the study but were weaned off. Thirty participants received two 25 mg doses of psilocybin three weeks apart, as well as six weeks of a daily placebo pill. The remaining 29 were also given psilocybin during two visits but such a small amount that it didn’t have an effect and was meant only to be a placebo. The second group also took a daily dose of escitalopram — the generic version of the antidepressant Lexapro — a selective serotonin reuptake inhibitor, or SSRI.

Participants in both groups were given the psilocybin dose in a clinician’s office where they were monitored until the clinician determined that any effects had worn off and they could safely go home.

At the end of the six weeks, the researchers used four measures of depression to determine whether the participants’ symptoms had improved: two questionnaires filled out by the participants and two evaluations from the clinicians.

All but one, a self-reported questionnaire called QIDS-SR-16, showed that people who took psilocybin reported greater improvement in depressive symptoms than those who took Lexapro. The QIDS-SR-16 results, which were the depression measurement method the researchers reported they would focus on before starting the trial, showed that psilocybin was as effective as escitalopram. (Before beginning a study, researchers must outline what measures they plan to evaluate and stick to that methodology regardless of the results.)

“We were honestly surprised that psilocybin performed as well as it did,” said lead researcher Robin Carhart-Harris, head of the Centre for Psychedelic Research at Imperial College London.

Carhart-Harris and his team said they weren’t able to measure the long-term effects of psilocybin compared to escitalopram, which takes longer to start working and might not have reached its full therapeutic potential during the six-week trial.

The researchers kept the trial relatively short because some volunteers had to come off their current depression treatments to participate, which can be risky, Carhart-Harris said. To look at longer-term effects, his team plans to collect data from the participants at the six-month mark.

Some outside experts also pointed out limitations of the study: It didn’t include a control group of people who received no treatment, and the cohort was 66 percent men, even though women in the real world are more likely to experience depression. It’s also difficult to make a study involving psychedelics truly blind, because patients might be able to guess which group they are in based on whether they experience noticeable effects of the higher dose of psilocybin.

But the findings do add to a growing body of research suggesting that psychedelic drugs could be used in clinical settings to treat depression and that they are likely to have lasting effects.

Alan Davis, an assistant professor of social work at Ohio State University and adjunct assistant professor of psychiatry at Johns Hopkins University, said the trial shows that there may be untapped depression treatments to help people reach remission without daily medication — and the cost and side effects that come with it. “To me, that represents a breakthrough,” he said.

More than 13 percent of American adults are prescribed antidepressants, data from the Centers for Disease Control and Prevention show, and SSRIs are the most commonly prescribed class of the medication. However, scientists still don’t understand exactly how those medications — or psychedelics — work on symptoms of depression.

“The receptors SSRIs work on seem to inhibit responses in the brain, particularly stress responses, and we think that takes the edge off so you can tolerate stress better,” Carhart-Harris said. “With psychedelics, it’s almost the opposite. It’s almost like a brutal confrontation with the root of your suffering, which can allow people to better understand where their depression stems from.”

Griffiths, who has also researched psilocybin and depression, said he was initially skeptical about what effect, if any, the drug would have on symptoms of depression. He expected to see a lot more variability in the outcomes of psilocybin research than there has been so far — most research has shown that psilocybin appears to have a positive effect on depressive symptoms in many of the trials in which it has been studied. Another small clinical trial, published in November in JAMA Psychology, for example, found that more than 70 percent of participants reported that their depression eased within a week of having taken two comparable doses of psilocybin, and more than half were in remission within four weeks.

“People ask me what I believe, and my answer is I believe in the data,” Griffiths said. “Psilocybin therapy is not going to be effective for everyone, and we are still at a very early stage of understanding what populations will be the most sensitive to the treatment. But there is no question that there is something very real to it.”