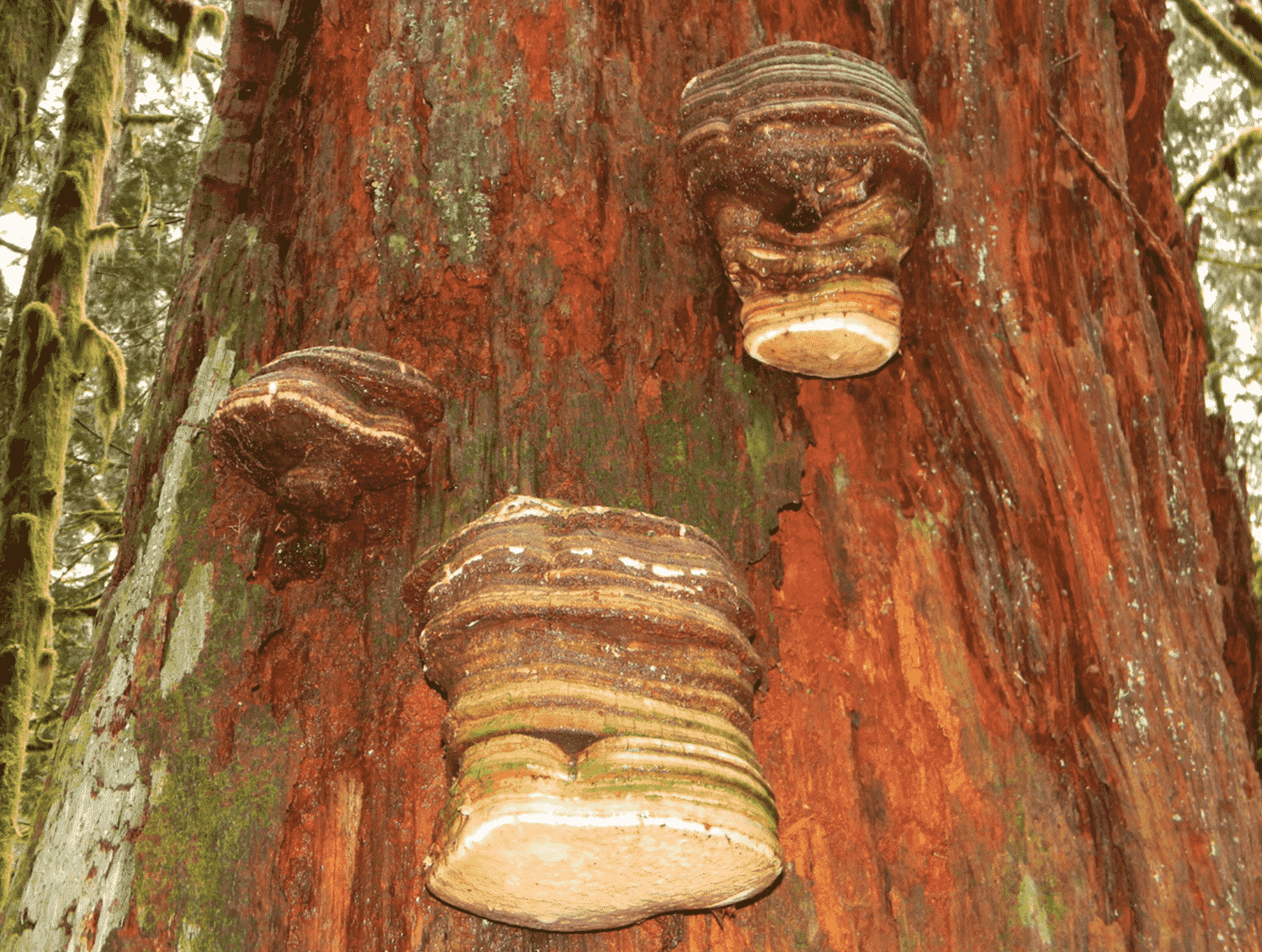 Right now, the species with the most hype is without a doubt the long-lived polypore, Laricifomes officinalis, also known as Agarikon. The species has been used medicinally for millennia, but its resurgence in popularity has spiked with the recent work carried out by the Jerry Garcia of the mycological world, Paul Stamets. Paul has an air of optimism about him that’s truly contagious. He really does believe we can heal the world by utilizing the traits evolved within the ancient and diverse fungal Kingdom. That belief is not a fanciful, illusion synthesized by a hippy growing up in the 70’s but is soundly backed by the rigors of scientific experimentation and publication. Paul has studied the metabolites synthesized in Agarikon and his results show promising medicinal value that can really aid human health. With this year’s flu season being the deadliest in decades, the antiviral compounds isolated from Agarikon may prove to be imperative for the longevity of our own species.

Agarikon is exceedingly becoming rarer to find for a couple of reasons. For one, Laricifomes officinalis is really only found in old growth forests, which too are becoming rarer in this human dominated time also known as the Anthropocene. Global climate change is shifting the moisture and temperature regimes all over the world, including the pacific northwest where this species resides in the Americas. By altering our planet’s atmosphere, we have indirectly reduced the abundance of this species. Possibly an even greater threat to this species are the direct interactions, including some logging techniques that completely obliterate ecosystems. Clear-cutting forever changes the ecological functioning of a forest, as most biological legacies from the forest’s past are removed. Sadly, after 150 years of intense logging in the pacific northwest, only 5% of the old-growth forests are left.  Since this species has such medicinal value, it has been seriously over collected and later sold to pharmacies all around the world. In fact, in German this polypore has the name “Apothekerschwamm,” which literally translates to the Agaric of Pharmacy.

Yet again, we find ourselves utilizing metabolites found in fungi to benefit our immune system. Why exactly do we benefit from these fungal secondary compounds so much? Interestingly, fungal infections are exceptionally difficult to treat. This dichotomy is tied together because animals and fungi share a recent common ancestor. We are both aerobic eukaryotes that chemically break down organic material to feed. Because we are evolutionarily similar, when we are infected by fungal pathogens, very few medicines can reduce fungal cells without harming our own. We’re just too similar from a cellular perspective. They have evolved compounds that we can use, again because of this similarity. Fungi encounter similar viral and bacterial strains that we encounter, and overtime have come up with independent chemical solutions to these threats.

This fungus has significantly more antibacterial and antiviral properties than the vast majority of other fungal species because of its own life history. Short lived species of fungi that complete their life cycle in a week don’t need to worry about pathogens much. Agarikon on the other hand is one of, if not THE longest-lived species of fungus on this glorious planet. Individuals can live up to 75 years! Living this long, it is no surprise that this species allocates much of the nutrients and sugars it steals from the heartwood of mature larch, pine, fir, and spruce trees to synthesize chemical defenses. Simply put, the older an organism, the more pathogens it will likely encounter.

Screening the anti-bacterial and viral properties of this fungus has yielded some incredible results.  Two separate studies in 2012 showed that Agarikon significantly reduced gram-negative bacteria and an insane amount of antiviral activity in type A influenza in birds and in humans. Paul himself found even more antiviral properties against multiple pox viruses. Additionally, chlorinated coumarins isolated from the fungus effectively work against tuberculosis, a disease that this species historically treated.

This species has some incredible properties, and many people including myself think that we are only scratching the surface of Agarikon’s medicinal merit.  Not enough isolated compounds have been tested to treat the growth and signaling of cancer cells. The long-lived Laricifomes officinalis may hold chemical secrets; unidentified metabolites that can aid human health for years to come. It is no coincidence the Greek physician Dioscorides appropriately named the Agarikon mushroom as “elixirium ad longam vitam,” which translates to the elixir of long life. A byproduct of the extended life history this species possesses is the evolution of powerful secondary compounds that combat viral and bacterial pathogens.

Agarikon symbolizes the current state of our planet. If we fight for our ecosystems, they will fight for us. More than ever, we must band together, and become even more active against corrupt politicians seeking to steal our land for a quick dollar. The health of the forest floor directly translates to the heath of us humans as individuals and as an entire species.

Previous Your Guide to Lion's Mane Mushroom Benefits and How to Use This Superfood Next Beyond Psilocybin: These Mushrooms May Offer Brain-Boosting Compounds, Too